The demonstrations, which organizers called the “White Lives Matter” rally, were planned by The League of the South, a southern nationalist group, according to Brad Griffin, the organization’s public relations chief. Other extreme-right and neo-Nazi groups joined them in the protests wearing black and bearing helmets and shields.
The groups had planned to start at Shelbyville and then head to Murfreesboro about 20 miles to the north, but the Murfreesboro rally was canceled, Griffin said. Still, large crowds of counter-protesters gathered in both cities to oppose the demonstrations. 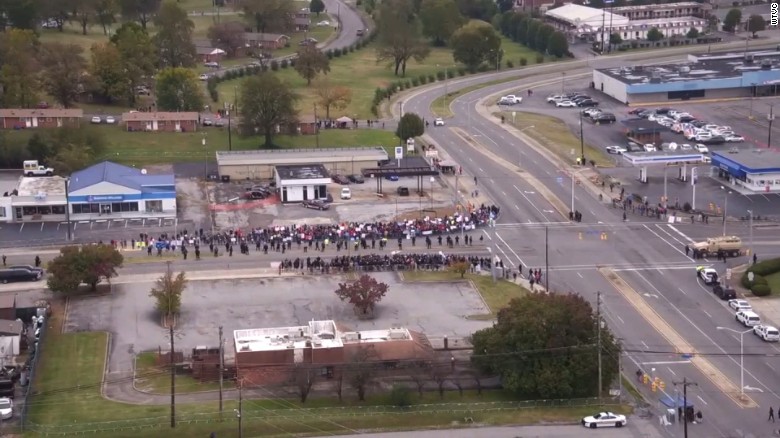 - Advertisement -
White nationalist groups (bottom) and counter-protesters (top) gather in Shelbyville, Tennessee, on Saturday.
At both rallies, police separated the two factions on opposite sides of the road behind barricades, and the proceedings were generally peaceful yet tense. City leaders in Shelbyville and Murfreesboro had advised people to avoid the rally areas, and the area surrounding the Shelbyville event was nearly deserted.
The rallies were expected to be the largest of their kind since the “Unite the Right” rally in Charlottesville in August, Griffin said. That demonstration became a scene of chaos and violence as the white nationalist groups fought with counter-protesters.

The decision to hold the rallies in Shelbyville and Murfreesboro, two mid-sized cities in central Tennessee, came down to familiarity, city demographics and several prominent local news stories, Griffin said.
The League of the South held a rally in Shelbyville in 2013 in an attempt to bring attention to refugee resettlement in that area. The event went fairly smoothly, Griffin said, so the organization trusted local law enforcement to protect them.
“We decided after that we didn’t want to do anything like (Charlottesville) again. We wanted to go to a place where we can expect the police to uphold the law,” he said. “Every event we’ve ever had in Tennessee has been peaceful. We have greater confidence in local law enforcement.” 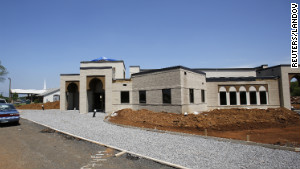 The demographics of the cities also played a role in the decision. Both Shelbyville, with about 20,000 people, and Murfreesboro, with about 130,000 people, are in more rural counties that heavily favored President Donald Trump in the 2016 election.
Charlottesville, which is home to the University of Virginia, has become a hotbed of white nationalistactivists partly because of the city’s decision to remove several Confederate monuments. Still, the city is a liberal stronghold.
Griffin said the rural Tennessee cities were the “exact opposite” of Charlottesville in terms of demographics.
“We do not think Shelbyville, Tennessee, will be anything Charlottesville, Virginia, just because it is a very different city,” Griffin said.
Murfreesboro has a recent history of racial controversy. In 2010, local Muslims proposed to build a new mosque in the city, and it led to harsh anti-Muslim sentiment and several years of legal wrangling. 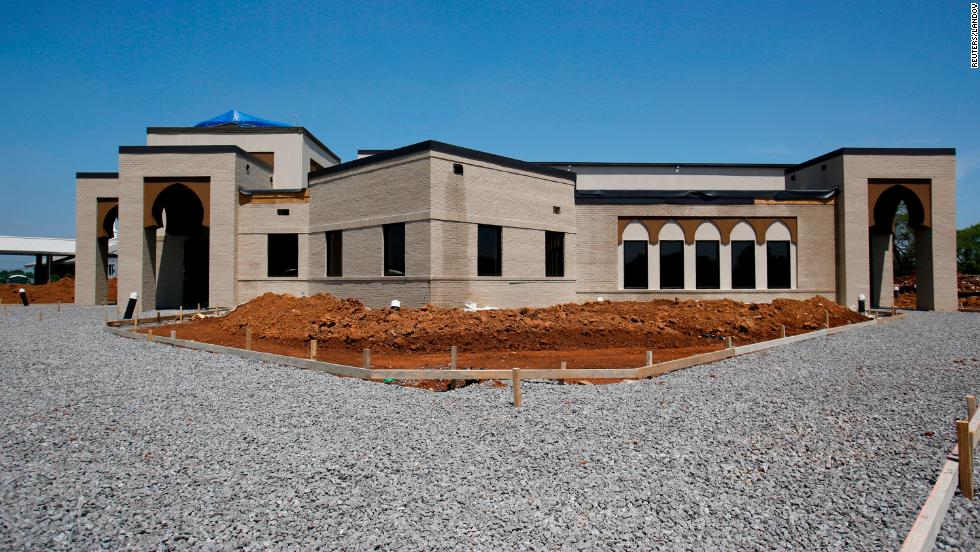 The Islamic Center of Murfreesboro opened in 2012 after facing significant local opposition.
A sign announcing the mosque was vandalized with the words, “not welcome,” and the building was targeted by bomb threats and arson. Still, the Islamic Center in Murfreesboro officially opened in 2012.
In addition, the far-right groups wanted to bring more attention to the shooting at Burnette Chapel Church of Christ in nearby Antioch that left one dead and seven others wounded last month. The suspect in the shooting, Emanuel Kidega Samson, was from Sudan and had legal US residency, police said. 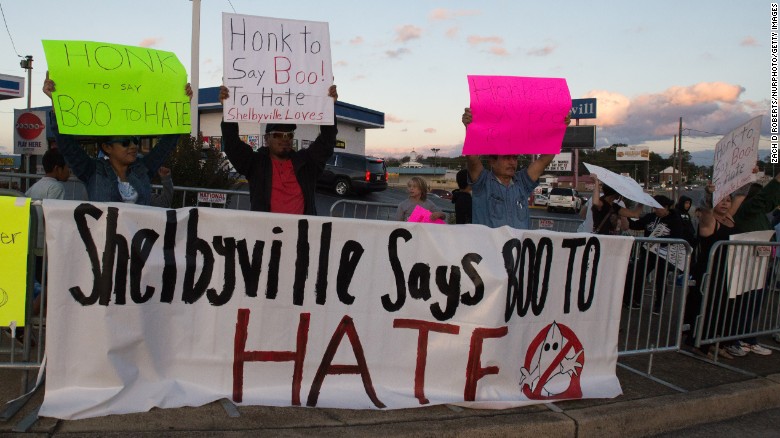 Shelbyville residents asked passersby to say “Boo to Hate” on October 27.
League of the South reached out to Shelbyville about three weeks ago to set up the protest, according to Shanna Boyette, the city manager. The city does not require permits to protest on public ground.
Murfreesboro does require approval to hold a protest, and the League of the South filed an application, according to city spokesman Mike Browning. The office of Mayor Shane McFarland issued the permit Wednesday, saying the city has limited legal authority to deny permission for the event, “regardless of how reprehensible the intended speech is.”
Jessica Ortega, 28, said she drove from Clarksville, Tennessee, to protest the white nationalist rally.
“I had to drive down. You can’t live a couple hours away from something like this and not get up off your a** to protest,” she said.
“What will I tell my daughters? ‘Mommy was too busy watching football to protest a Nazi takeover?’ Not me. Not in my state,” Ortega said.
Mayor McFarland posted a video on Facebook with several religious and community leaders supporting diversity and denouncing prejudice and injustice. “We are Murfreesboro and we stand together,” McFarland said.
In Murfreesboro, some businesses and restaurants boarded up their windows near the rally sites and posted signs saying “Murfreesboro Loves.” That phrase, one of the main hashtags for those opposed to the rally’s message, was also written into the fence outside the Murfreesboro Boys and Girls Club.
Because of the rally, Middle Tennessee State University in Murfreesboro canceled plans for a band competition and postponed a science event scheduled for this weekend, according to the university’s president, Sidney McPhee. 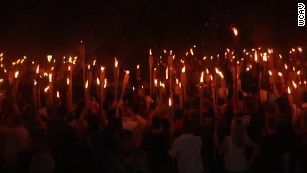 By the numbers: 7 charts that explain hate groups in the United States
“The groups initiating Saturday’s rally do not reflect the values of our university and we are heartsick that so many of our plans and activities set on campus have been disrupted out of an abundance of caution,” McPhee wrote in a letter to the community.
But some residents planned to stand up to the rally with competing protests and community action. Keith Caldwell, a pastor at a Murfreesboro church, told CNN affiliate WSMV he was planning to gather to counteract their message.
“We are effectively praying with our legs in order to show up and look evil in the face and to say, ‘We withdraw consent from your power,'” Caldwell said.
In addition, a Facebook group called Murfreesboro Loves was planning to hold marches, prayers and rallies in different areas of the city Saturday, followed by an event with live music and pizza.