(CNN) – French conservatives have picked François Fillon as their presidential candidate in next year’s election.

Fillon easily beat Bordeaux Mayor Alain Juppé in the Republican party’s first ever US-style primary runoff Sunday, getting about 66% of the vote.
“Victory is mine. It is a substantive victory built on belief,” Fillon said as he spoke to supporters after his win. “We have all the assets to be a modern, sovereign nation in the lead in Europe.”
Fillon could face far-right National Front Party leader Marine Le Pen in the final round of the presidential vote next spring, as voters are widely expected to boot out the Socialist Party that has ruled France since 2012 under the leadership of President Francois Hollande, whose popularity is waning.
“This past presidential term has been pathetic,” Fillon said in criticizing Hollande. “It is time to end it and start moving forward as we have never done in 30 years. For this we will need everyone.”
Sometimes called the “French Thatcher” for his apparent admiration of Britain’s former leader, Fillon is a social conservative who has talked of ending France’s famed 35-hour work week and getting tough with the country’s powerful trade unions. He has also spoken of cutting public spending, abolishing the wealth tax, reducing immigration and investing billions in security, defense and justice.
A hard line on immigration has also bolstered Le Pen, whose anti-Europe stance is gaining popularity among French voters. In an interview with CNN last week, she said she’d been emboldened by Donald Trump’s surprise victory in the United States.
“It makes the French realize that what the people want, they can get, if they mobilize themselves,” she said. 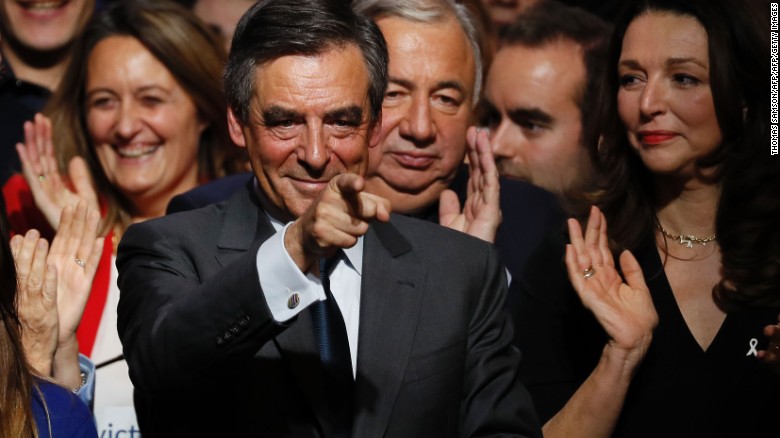 Francois Fillon after giving a speech at a campaign rally in Paris on Friday.
Just a month ago, Fillon was considered an unlikely bet for the presidency, but he won over voters with a polished performance in televised debates.
Polls had him mostly in third place, but he apparently struck a popular tone in the country’s fight against Islamic terrorism and ISIS after publishing a new book, “Beating Islamic Totalitarianism.”
The first round of the primary, on November 20, put Fillon well ahead, with 44.1% of the vote. Juppé received 28.6% and former President Nicolas Sarkozy came in third with 20.6%, eliminating him from the final round.
Fillon, 62, is a lawyer who served as prime minister between 2007 and 2012 under Sarkozy. He has been compared to Britain’s “Iron Lady,” the late Prime Minister Margaret Thatcher, for his hardline social policies.
French newspaper Liberation morphed Fillon’s face with Thatcher’s in a cover image this week — no doubt inspired by the Republican’s tough talk on unions and pledge to cut 500,000 jobs from the civil service.
As a Catholic from Le Mans, a city in northwest France, Fillon symbolizes the traditional provincial right.
The father of five lives with Welsh-born wife Penelope in a 12th-century castle near where he grew up. Fillon also is a race car enthusiast who once appeared on France’s “Top Gear” TV program. 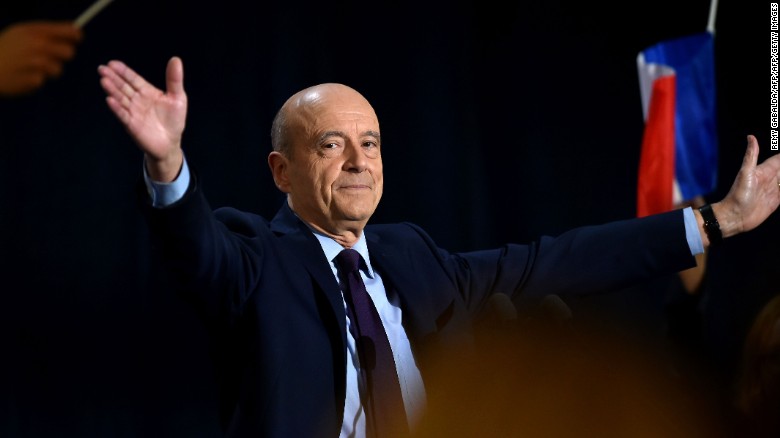 Bordeaux Mayor Alain Juppé at a public meeting in Toulouse, southern France, on Tuesday.
Juppé, 71, also served as prime minister — from 1995 to 1997 under President Jacques Chirac.
He’s seen as a reliable and experienced politician, and a center-right moderate who has promised to promote a “happy national identity” if he comes to power.
But he’s also been tainted by scandal. While deputy mayor of Paris in charge of finance in the 1980s and 1990s, Juppé was accused of using public funds to pay political allies.
He was found guilty of corruption in 2004 and sentenced to 18 months in prison and barred from holding public office for a decade. His sentence was later reduced to 14 months imprisonment and one year of ineligibility.
Juppé was reelected mayor of Bordeaux in 2006, beginning a political comeback.
The father of three lives in the Bordeaux region with his journalist wife, Isabelle Legrand-Bodin. 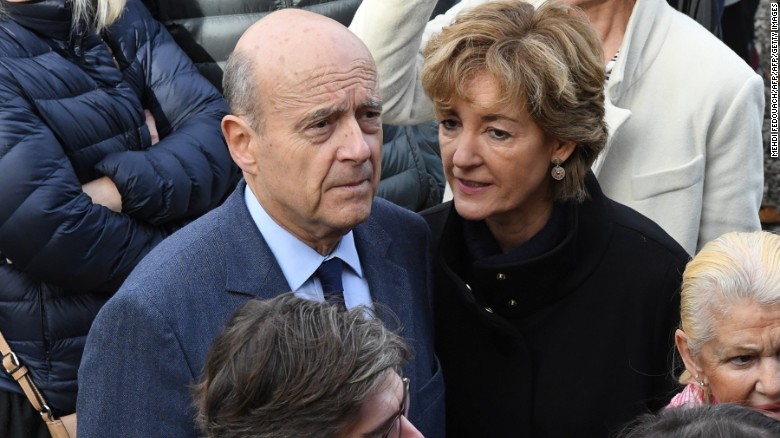 Juppé with wife Isabelle Legrand-Bodin at a polling station in Bordeaux on November 20.
**Photo via CNN
- Advertisement -